skip to main | skip to sidebar

A Response from the Red Cross about Japan

Thank you for your inquiry. Unfortunately, it seems as though you have received some incorrect information. The American Red Cross has made an initial contribution of $10 million to the Japan Red Cross, and is funding approximately half of the United Nation Food Programme’s operations in Japan. As longer-term plans are formed and pledges are fulfilled, the American Red Cross will make additional financial contributions to its partners to assist people coping with this disaster.

The disclaimer you mention states: “On those rare occasions when donations exceed American Red Cross expenses for a specific crisis, contributions are used to prepare for and serve victims of other crises.” In the case of the Japan relief efforts, with the crisis still unfolding, it is impossible at this time to have a final dollar figure that will be needed. Therefore, the American Red Cross is still gratefully accepting donations to the Japan Earthquake and Tsunami Relief fund. If you are interested, you may make a donation by:

I hope this information is helpful. If there are any further questions or concerns, please feel free to call me at (716) 878-2372. Thank you for your interest, and have a great day.

And Cammo and I were there in Angouleme for the launch...

(Should've gotten that haircut before I left.)

As I mentioned over on Twitter, I've been in the process of figuring out just how many new freelancers were hired by Marvel in 2009. So after looking over various spreadsheets and data, and culling down lists of talent we've started working with in the last 12 months, I've calculated, albeit in no real exact scientific or mathematical way, that Marvel's editorial/publishing arm hired 144 new freelancers in 2009! That high number surprised even me, to be honest. Not bad for being in a recession, eh? Looking at that number more specifically in terms of artistic disciplines, here how it further breaks down...

A few other quick observations just looking over the list...

- 18 of these talents were women.
- It struck me the number of writers from the previous year when we were publishing Marvel Comics Presents and the Unlimited line of anthologies.
- The increasing number of pencilers who have started to ink themselves lead to a fall in the number of dedicated inkers we hired as well.
- Geographically speaking, the largest percentage of talent came from the U.S., followed by Italy, Spain and South America.
- These numbers reflect what I'll call "first-time talent" who had never been published by Marvel before. I took out any talent who had returned to Marvel after a long period of time after working in other industries or at other companies, and also removed artists who left studio systems and came to work for us directly, of which there were quite a few.

And I'd like to publicly thank Angie Nunez and Alex Morales at Marvel for their help in getting me all the freelancer data to review. I couldn't have done this without them.
Posted by C.B. Cebulski at 1:44 PM 98 comments:

In comic and book stores everyday... 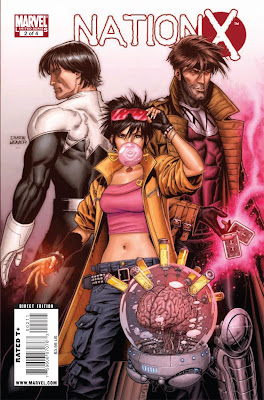 Nation X #2 goes on sale in comic shops across America today, featuring a Jubilee story co-written by me with Jim McCann, and beautifully illustrated by Mike Choi and Sonia Oback! Here's a preview over at CBR...
Posted by C.B. Cebulski at 7:34 AM 18 comments:

The Blogs of my Buddies...